Vicki Gunvalson hosts the "Whoop It Up with Vicki" podcast on Westwood One. The “OG of the OC,” Vicki appeared on The Real Housewives of Orange County since its first season. As a successful entrepreneur, reality star, mother and grandmother, she has redefined what it means to be a powerful modern woman. Her ability to evolve while staying true to her roots as life has progressed has led her to become America’s most loved reality star as she has continually invited us into her home and hearts for the last 14 seasons of The Real Housewives of Orange County. Born in a small Northwest suburb of Chicago, Vicki is one of five children. Her father owned a large construction company and her mother was a stay at home mom who cooked every night for the family and still always managed to look impeccable. Growing up, Vicki learned her work ethic from her father. He taught Vicki and her siblings to live within their means, to pray, to be thankful for what they had and to always strive to achieve their best in every area of their life. Those formative years watching her father’s work ethic and tenacity for life inspired who she is today. Vicki became a single mother at the age of 29 and one of her close friends advised her to purchase a life insurance policy for herself as she was the breadwinner for herself and her two small children. After further discussions with her friend, she decided to get licensed to sell life and health insurance. Within her first year she was ranked the top salesperson at her company. Today Vicki is the proud owner of Coto Insurance and Financial Services, Inc. where she is proud to mentor and employ other women and mothers like herself. In 2018 Vicki was awarded The United States Department of Defense, “Patriot Award” for her support of military spouses and families. In 2005, with the premier of The Real Housewives of Orange County,” her life moved in yet another direction. Since the show’s early days filming in Vicki’s office and backyard, the franchise now boasts eight “housewives” shows across the county, 11 International “housewives” installments and RHOC can be seen in over 120 countries and territories around the world. Most recently, Vicki wrapped up filming Season 14 of The Real Housewives of Orange County. She loves spending time with her boyfriend of two years Steve Lodge. The couple enjoys country music concerts and spending time with their kids and grandkids. 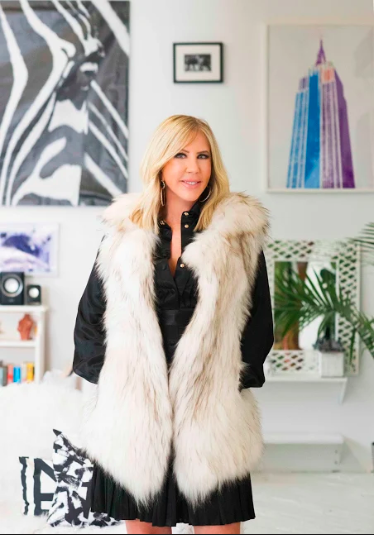